Baa Atoll in the Maldives is the setting for a seasonal spectacle unlike any other witnessed at any other location in the world. Douglas David Seifert reports on the world’s greatest manta ray aggregation

The bay of Hanifaru (‘narrow reef’ in Dhivehi) is formed within a westward meandering spur running from the southeastern edge of a small island and large sand flat cay called Hanifaruhuraa. The island itself is small and unremarkable, with high, steeply banked, white sand dunes and native scrub vegetation, but leads to an extensive sand flat peppered with coral heads and a deeper centre section that is used as a landing zone for the Maldivian Air Taxi seaplane

Hanifaru Bay opens to a deep-water channel, that bisects the island from the populated neighbouring island of Dharavandoo, and is itself a pass to the deep ocean beyond. From the opening, the bay funnels inward, gradually, from a depth of 25m to a slope that tables out at 2m and continues over a shallow, rocky reef.

One large coral block in the middle of the sandy channel retains a small stand of surprisingly lush stony coral, which provides a habitat for small fish and invertebrates. The block is also the site of a ‘cleaning station’ where manta rays make periodic visits to have parasites and dead tissue removed by eager striped cleaner wrasses, and large swarms of blunt-headed and moon wrasses. 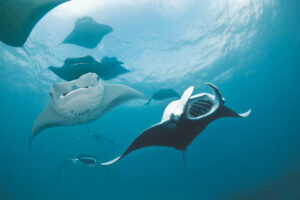 The conditions are not challenging for divers: a bright, shallow amphitheatre, with negligible current and a maximum depth of 20m if you pushed it. Going deep is not the point here, since so much of the action occurs at or just below the surface. There are no dangerous sharks, as the local fishermen of Baa Atoll have a long history of shark fishing and have more or less made sharks extinct. The water visibility is variable: perhaps 20m on a good day; 5m on a bad day.

For much of the year, it is a mostly quiet bay. During the southwest monsoon (the hulhagu, which runs from May to November), an upwelling current from the deep waters to the east brings a superabundance of plankton. These are primarily copepods, that mass in great populations in deeper, offshore waters, and have been dramatically plucked from the depths, carried a short distance, and deposited into the relative shallows of Hanifaru Bay.

The copepods become trapped in the lagoon and their super-concentration attracts plankton predators of all descriptions, including manta rays, which can suddenly appear by the dozen, and frequently even whale sharks. 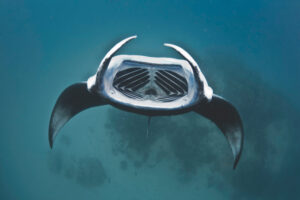 Hanifaru Bay is a place where the dreams of nature at its most beautiful and most extraordinary intersect with the nightmare of base human nature and mob mentalities.

The dream is to see madi – mantas rays, and lots and lots of them; manta rays so busy with feeding that they can be closely approached. That dream can reach an even higher and more mind-blowing level with the surprise guest appearance of fehurihi – the whale shark – which does happen fairly regularly.

The arrival of the copepods is sudden: from no discernible plankton to a sudden awareness that a swarming cloud of tiny black dots is present. They are everywhere, and small schools of fish congregate upwards from the protection of the corals and ball in formation, a temporary alliance of differing fish species brought together for mutual protection in the midwater, while they vie for the sudden abundance of food, darting constantly to grab a morsel from the water column. 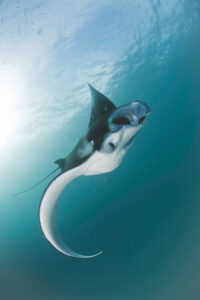 The manta squadron swims in close formation, with some rays stacked one above the other, their beating wingtips coming close enough to touch but without colliding, and the remainder of the manta ray train trails off into the distance like some kind of swimming procession.

Upon locating a thick patch of food, all order is abandoned. Various mantas break formation and begin feeding: their cephalic fins unfurl and stiffen to function as funnelling paddles and curl inwards to channel volumes of seawater and water-borne copepods into their wide, open mouths. It is a technique called ram filter-feeding: the mixed food and seawater are pushed via the animal’s forward motion into the mouth. Here, the water passes over filter plates attached to the gill bars, which trap the copepods, and the sea water – minus the plankton – passes out over the gills.

The mantas are large: up to 4m across for a mature female; males are somewhat smaller at three and a fraction. To watch a 4m manta ray effortlessly performing slow-motion backflips is mesmerising.

The manta has the largest brain-to-body ratio of all the sharks and rays; it would be fascinating to learn what it is thinking and how it sees the scene. 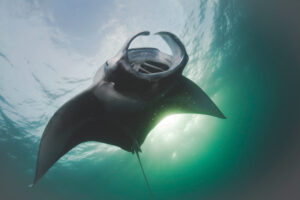 When the plankton patch is particularly thick, it is not uncommon to see a half dozen or more manta rays barrel-rolling in gluttonous ecstasy amid the calm water of the lagoon. Combine the barrel-rollers with other groups of mantas diligently patrolling the area, searching for the optimum plankton swarm – one squadron headed in one direction passing a similar-sized armada going the opposite way – and you have a manta traffic flow that is completely otherworldly.

In this behavioural mode, mantas follow each other head to tail, creating an extended train. Communication between individuals must occur; the mystery is how, and no-one has an answer for that yet.

The main feeding area of the lagoon itself is the place where the plankton is most likely to reach maximum concentration due to tidal flow and outgoing current. This area will, as the feeding event heightens, become extremely crowded with manta rays, due to the narrowing, funnel-like physical boundaries of the lagoon, and also due to the rapidly shallowing nature of the steep sand slope where the plankton concentrates and collects before it is carried out of the lagoon.

To put it into perspective, the main feeding area between the coral blocks of the deep cleaning station and the sandy slope to the shallows is the size of a rugby pitch. The area where the plankton is the thickest at the climax of the feeding event is near the sand slope and is the size of a tennis court. It sounds roomy until you consider the size, mass and manoeuvre of a melee of 20 or so 3–4m manta rays rushing heedlessly towards the last course of their plankton feast.

In this area, the manta squadrons can become dense and chaotic, flapping wings carrying mantas in every direction, seeking food while attempting to avoid collision with barrel-rolling fellows and trying to take advantage of the profusion of plankton.

The numbers of mantas massing in the lagoon are inconsistent. Some days, when there is no food in the lagoon, no mantas will appear. Other days, 20 to 50 are common, and, according to researcher Guy Stevens, on banner days, more than 200 manta rays congregate in Hanifaru Lagoon. His record for one single day is 240 individuals, based on the markings unique to all individual rays. 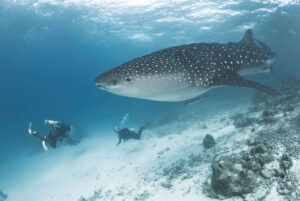 Stevens has more than 1,500 individual mantas catalogued in a database, with around 800 identified in Hanifaru Lagoon over the past five years.

When it comes to manta rays, more is not known about them than is known. Only in the past three years has a significant mystery about manta rays been perhaps solved. For decades, there has been a heated debate among taxonomists, field scientists and underwater observers about whether the genus of manta ray is singular, or if different species exist. From a distance, manta rays may appear similar, but behaviour and size are perplexingly inconsistent by location.

Six years ago, Andrea Marshall, an American researcher, began studying a population of manta rays in Mozambique. While noting behaviour and making a species identification catalogue, she noticed something that only a few other researchers had observed. Namely, that among the ‘regular’ mantas she would see on a recurring basis, some were very different. They behaved differently – they were more standoffish and more flighty; they were larger and had different colour patterns. 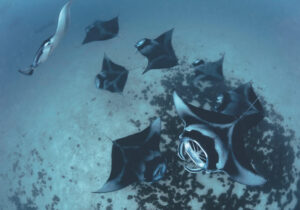 The common mantas generally stayed resident at a certain stretch of reef and did not venture great distances; the larger mantas were not as often encountered, leading Marshall to the conclusion that they pursued a more pelagic lifestyle.

The irregularly seen, ‘different’ mantas were so distinct that they had to be either a subspecies or a new species. Marshall, adhering to the protocols of scientific methodology, has had to, in order to make a distinction between the two mantas, refer to the common reef manta as variant A and its larger counterpart with a different life history as variant B.

Full details at the link below:
Source URL: divemagazine.co.uk

Kamadhoo Island one of the best yoga destinations in the Maldives has the perfect combination of adventure and relaxation, yoga practice, and beach naps. You will practice on the beach, swim in a natural pool alongside turtles, watch dolphins dance to the setting sun, and make lifelong friendships. Explore the house reef during your free time, or finally read that book under a palm tree next to warm turquoise waters. Kamadhoo Island offer you the opportunity to take control over your health and well-being while being fully immersed in nature and the local culture.